From King James Bible, Psalms 8:2: “Out of the mouth of babes and sucklings hast thou ordained strength”.

The precious ritual of naming your yet-to-born baby is right up there with first-time grandparents picking their grandparent names. Our dear niece Heather, wife of nephew Scott, combined her graduation from Fuller Seminary with a celebration for all of us: the announcement that they were with child. 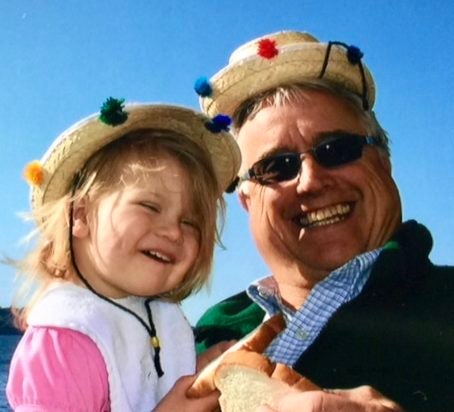 Earlier that day as we watched Heather promenade down the aisle to receive her degree, sporting that cap and gown like a runway model, I noticed the pure joy emanating from her. She caught Scott’s eye and actually winked at him with a million-dollar smile as she made her way to the stage. My thought was, I don’t remember feeling that much joy at my college graduation. I need to work on fully living in the moment!

Heather announced the good news in such a fun way: Each of us a received a gift from her at her graduation reception: books for people about to become grand, about to become great. Grandparents. Great aunts and uncles. As Scott and Heather’s parents opened their gifts, they thought, hmmm. But we’re not grandparents. That’s funny…then BAM! The collective realization hit them all at once! We ARE going to be grandparents!!

Screams of joy! Tearful hugs! Laughter! Sparkling apple juice toasts! And then…the stakeout. What would the first grandchild on both sides of the family call their grandparents? Who wanted Grammie, Grandma, Pops, Gramps?

Heather’s gift to her parents, Chris and Rick, was a book called “The Nanas and the Papas”. So, they decided they would be Nana and Papa.

Joe and I decided that our title should be what we had insisted upon for years:
Favorite Aunt and Uncle, and Favorite Great-Aunt and Great-Uncle.

Scott’s mom Sally picked Mimi. (There is a possibility that this is the first grandparent name that the baby might be able to pronounce. Not that it’s a competition.)

Scott’s dad Dave wasn’t at the ceremony in California. It was summer and he was up to his neck in the business of running their fishing lodge in Canada. It had been one of those demanding days, which for Dave started at 3am as he chose the best fishing paths for his guests that morning. That group had already drank enough Crown Royal for an Elks Lodge Convention, and a boat had to be dispatched to replenish the supplies before the dinner that night. So, when Dave got the giggly, excited, shouting, toasting phone call from California, and when asked what he wanted his first grandchild to call HIM, he said, “Just Dave! Have the baby call me Dave!” 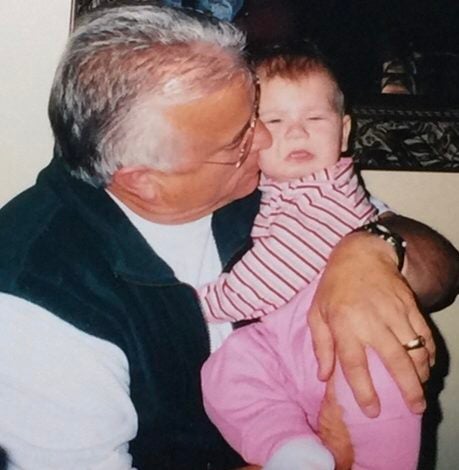 Fast forward to the following February. Baby Avery Marie Sund is born. Everybody is smitten. There must’ve been 30 of us from out of town for her dedication ceremony at church. And nobody is more smitten than Dave.

The little family spent Avery’s first year in a really cool three-story condo in the Fremont district of Seattle. We all visited often; Sally and Dave, the most frequently of all.
On Avery’s first birthday, she had already said Mama and Dada but had not mentioned a grandparent by name at all. She had, however, seen and observed much: every time Dave and Sally came, Sally would shout, “Dave! Make sure the car’s locked!” “Dave! Bring the presents in from the car!” “Dave! Don’t forget the salad on the back seat!” (shouting to be heard from the top story to the bottom)

On Avery’s first birthday, she sat on a little round coffee table, holding court as we presented her with her birthday gifts. One of Dave’s presents was a little toy telephone. Delighted, she picked up that little phone and shouted into it, “’Ave! ‘Ave!”

She had four grandparents and three great-grandmas at that time. The first name she called out was Dave’s, and we all heard it. He tried to hide that self-satisfied grin of delight. “Well, you never know what a one-year-old is going to say!” but he was over-the-moon thrilled.

Avery’s speech skills grew by leaps and bounds from that day. She said “Nana” and “Papa” and “Mimi.” But she no longer called Dave, “’Ave.” Before she was two, she crowned him with the title of Monka. Whether that was her trying to say Grandpa or whether that was something special she’d been saving for him, we don’t know. But now all 5 of Dave’s grandkids who live on earth call him Monka. When both grandpas are there, it’s “Monka Rick” and “Monka Dave.”

Avery is now a smart, literary, beautiful teenager who is an excellent actress, a great writer, and a compassionate, kind person, even to her three younger siblings. She is lucky enough to have two grandpas that are alive, and that she loves. And still she calls Dave,  “Monka.”

And Jesus said to them, “Have you never heard, ‘From the mouths of infants and nursing babies you have created praise?'” ~ Matthew 21:1

Submitted for use by The Grandpa Project by Deborah Bernhard, Bellingham, Washington

Here’s another story of grandpa love we think you’ll enjoy.