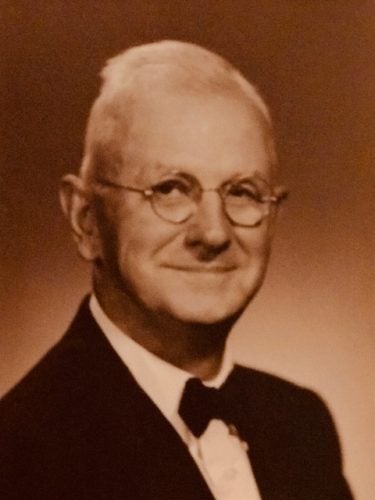 The Rev. E.S. Coffman, as he was respectfully known in the area around Harrisonburg, VA, in the 1950s, was a mostly retired Church of the Brethren minister. I say “mostly,” because he continued to serve three small churches in the “hollers” of West Virginia each and every Sunday.

My first and foremost memory was learning to drive the gray Ford sedan, with a floor-mounted stick shift, that granddad owned the entire time I came to spend summers on his farm, about 20 miles outside of Harrisonburg, from ages six to 17. Especially in the teen years, I hated leaving my home in Aberdeen, MD, and missing playing summer baseball with my buddies, but I came to realize that it was well worth the sacrifice.

The trip from the farm to the trio of churches required a trip across the Blue Ridge Mountains, via a steep and winding two-lane highway. When I first was allowed to take the wheel, about age 14 (the Virginia driving age was 16), granddad always sat in the passenger seat as my co-pilot/instructor, with grandmother, Bessie, and sister, Carole, who was six years younger, in the rear seats. That was before Driver’s Ed was offered in my high school, so the opportunity was welcome and the “course” was far more challenging. But I never had an accident, or even a close call.

As a further bit of background, granddad also was a gentleman farmer, presiding over a 40-acre spread in Mennonite country, where—with the help of a tenant farmer named Fred—he grew alfalfa, wheat and corn and raised chickens, milk cows and hogs. Bessie was a remarkable multi-tasker, from dawn to dusk, making delicious home-grown meals, tending the garden, feeding the chickens and hogs, milking the cows (I never saw granddad milk a single cow)—and even leading the singing at those three little churches on Sundays.

Granddad was quite a teacher

Rather than try to weave a story, I’d prefer to simply share a series of anecdotes, all of which contain lessons and or memories that remain with me to this day, as a freshly minted octogenarian:

• Swimming: Granddad taught me to swim at a special spot in the nearby Dry River, an oxymoron if there ever was one for this river that often overflowed its banks. His instruction was done from the comfort of the river bank and the dangers posed by poisonous snakes that were known to frequent the river, though fortunately I never encountered one.

• Negotiating: Shenk Hatchery was the leader in their business in Rockingham County, and negotiating the price of chicken-egg sales to Shenk was always a big annual deal for granddad. I especially remember the year he took me on his sales calls to Shenk and a competitor, when I was about 10 years old. At the competitor, he said he’d take 50 cents a dozen for his eggs. Moving on to Shenk, he told the guy he couldn’t take a penny less than 60 cents. At which point I broke my silence and offered, “But granddad, you told the other guy 50 cents!” Needless to say, I wasn’t invited on any other sales calls.

• Public Speaking: Also about age 10, I got my introduction to public speaking. Granddad encouraged me to learn the Beatitudes (the eight blessings recounted in the Sermon on the Mount). Then, at the church services in West Virginia, I’d come to the pulpit and recite them from memory. Afterward, granddad offered any youngster in the congregation a little gold bible if they could come forward and recite them the following Sunday. Many did.

• Country Music: My introduction to Country was at the Massanutten Fair Grounds, where a young Lester Flatt and Earl Scruggs were the featured performers. And I got another strong dose every Sunday when a different family would get the honor of hosting “the Reverend Coffman” and his family at a noon spread of marvelous down-home cookin’. After all were stuffed, there ensued a session, featuring at least two fiddlers and a bass player, that would do the Grand Ol’ Opry proud.

• Tobacco: I never chewed, but I smoked for about 30 years and my father, Ralph, smoked unfiltered cigarettes his whole life. It was likely in the DNA we inherited from granddad, who never smoked but who always kept chewing tobacco under the front seat of his old gray Ford. And there were the frequent traces of tobacco juice in the creases of his mouth. I never saw him buy it or him and Bessie discuss it, but granddad was hooked on his chaw.

• Respect: One of my other trips into Harrisonburg to (literally) spend the egg money, was a lot better received by granddad. At age 14, after a half-dozen summers of such trips, I finally said, “Granddad, I don’t want to go to town with you any more.” I still can see the look of surprise on his face. “Why’s that?,” he asked, with a trace of disappointment in his voice. “Because no one knows you,” I replied. His face immediately brightened, realizing that I’d caught him in a joke, because virtually everyone we passed on the busy streets of Harrisonburg always said, “Hello, Rev. Coffman.” Best of all, it was a story he loved to share with others. l’ve never known anyone who was shown a greater level of respect, and it made me proud to be his grandson.

• Softball: Those summers in Virginia, when I couldn’t play baseball with my buddies back home, I did the next best thing and played softball in the Rockingham County church league. Granddad would let me take the Ford, even though I was not yet 16 and had no license. My most enduring memory is standing in the dim lights of left field when the feared Johnny Hensley of the Bridgewater team was a bat, and praying he wouldn’t hit it to me.

• Dating: My first-ever date was with a farm girl I met at one of those softball games. We went to a drive-in movie, which was a new thing back in the mid-’50s. It was the first time I remember holding hands with a girl in any kind of romantic way. But what I remember most is the fact that the index finger on her right hand was only a stub! She explained that she’d lost it in an accident with a hay baler two years earlier.

• Independence: The last two summers, I joined an American Legion baseball team that practiced and played on the Harrisonburg High School diamond. More often than not, granddad had business that meant the old Ford was unavailable to me. Undaunted, I’d hitchhike the 20 miles back and forth to Harrisonburg, mostly on country roads that averaged three or four vehicles an hour, with at least one of them being a Mennonite horse and buggy. I still can’t believe I did that—sometimes even near midnight, when we played night games.

• Weather: On some of those hitchhiking trips, I’d get caught in one of the thunderstorms that are frequent during Virginia summers. I vividly remember how granddad loved to stand outside, with the rain pelting his face, watching lightning illuminate the sky. He never said much, but I believe it was his way of communing with nature—and the God he so strongly believed in and served.

• Daily Newspapers: Perhaps the journalistic ink in my blood was first introduced during those special summers. Neighbor Emmer Rhodes, also a gentleman farmer, was the mail carrier who brought the Harrisonburg News Record each weekday. My only interest in those years was to see how my beloved Red Sox had fared the previous day (the Baltimore Orioles didn’t come into existence as a Major League team until 1954). I knew the names and batting averages or pitching records of every player on the Red Sox roster, including my all-time sports hero, Ted Williams. Little by little, I took note of the other news in the paper and the rest—as they say—is history, regarding my long career as a journalist and newspaper publisher.

• Farming: I learned during those summers that farming was one thing I definitely didn’t want to do later in life. My worst fear was going into the hen house in my short pants and being attacked by the angry roosters, which happened frequently. And when it came time to thrash the wheat (i.e., separate the grain from the chaff), I was the one assigned to the second-story hay mow in the barn to distribute the hay as it blew from the long thrashing-machine tube, along with suffocating clouds of wheat dust. And Bessie tried to teach me to milk cows, but i never really got the hang of it—and granddad certainly was no help. I probably got that from him, too.

• Driver’s License: I finally got a Virginia driver’s license, just weeks after my 16th birthday—but not before I had logged thousands of miles behind the steering wheel of that old gray Ford.

• Hospitals: The first time I was ever in a hospital was when I accompanied granddad as he visited some of his church flock in Rockingham Memorial Hospital in Harrisonburg. Granddad died in that hospital in the Fall of 1957 at age 76. I was a freshman in college at Bowling Green State University in Ohio at the time and unable to make the trip to his bedside. But months earlier, before I even knew he was ill, I somehow had been moved to write and thank him for all of the things that he had taught me. Bessie told me that he asked for me often and read and reread my letter, sometimes several times a day, during the two weeks on his deathbed. I can never remember granddad telling me he loved me. But Bessie’s words told me he did.

• Epilogue: Fred Roher and his family bought the 40-acre spread they had farmed for granddad for a couple of decades, as well as the old homestead, which Fred had extensively remodeled. Bessie died in 1980, at age 95. Sister Carole married well, has two grown children, and lives in Germantown, MD. 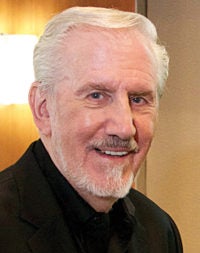 All of those anecdotes—and I could conjure up dozens more—add up to the indelible imprint that granddad made on every aspect of my life. I feel—and often “see”—his presence:

• When I write, and remember him drafting his stirring Sunday sermons;
• When I speak in public, and remember his magnetic presence in the pulpit;
• When I relate to people, and remember walking proudly with him, from the streets of Harrisonburg to the “hollers” of West Virginia;
• When I listen to Country music, and my mind is drawn back to Lester and Earl at Massanutten and those Sunday afternoon fiddle sessions;
• When I drive, swim or visit/recover in a hospital;
• When I’m in the outdoors, especially in a thunderstorm…

But above all, I believe granddad’s greatest gift was preparing me to be a catalyst for thought and action—just as he was with his church congregations over a long and successful ministerial career. The last three decades of my career as a journalist have been devoted to building the marketing communications community in the Seattle area, through the written and spoken word—just as he did with his congregations. I hope he would be proud.

Submitted for use by The Grandpa Project by Larry Coffman – Seattle, WA.

Coffman published MARKETING newspaper from 1986 until December, 2017, when it was transitioned to digital delivery via www.marketingnw.com. Prior to that, he wrote for both the Associated Press and The Seattle Times and ran the weekly Auburn-Globe News. He has degrees in journalism from Bowling Green State University (BA) and Syracuse University (MA). You can contact him at larrycoffman@frontier.com or 425-487-9111.