“Grandchildren are the crown of the aged.” 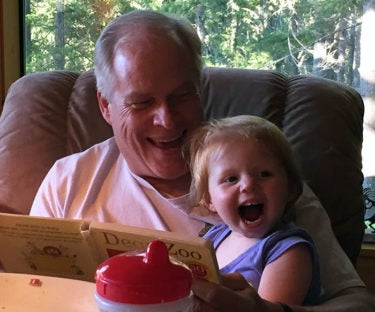 That’s a profound truth, but it’s one I couldn’t conceive of in my youth, and even into my early adult years.

For a long while I found young kids awfully annoying. I saw them as needy little attention-starved whiners, far less loveable than, say, our family beagle, or any other dog for that matter.

I began to soften after my niece and nephew were born. Today, it’s hard to fathom that I ever disliked kids. I’m drawn to them like a magnet.

It took becoming a parent to change that, and believe me, once I became a dad at age 30, I flip-flopped 180 degrees hard and fast. All the kooky conduct I once saw as being contrived by little tots to draw attention I soon learned was authentic, totally innocent, and endearing.

Kids aren’t trying to be funny. They’re hilarious simply by being their genuine selves.

I remember other parents warning us, “Beware of the ‘terrible twos.’ They will wear you out!” But my wife and I loved that phase. Our infants-turned-toddlers suddenly grew willful and sometimes defiant, just as they were learning to string sentences together.

How can that be anything but comical, coming from people less than three feet tall?!

We’ve been blessed with two kids who pretty much gave us smooth sailing during their entire upbringing. Sure there were a few occasional skirmishes, but both kids are now good, loving, well-grounded adults.

What’s more, our daughter and son-in-law have blessed us with (so far) two kids of their own. We never thought we could love any kids as much as our own. But indeed, it’s happened. We now serve as grandfather and grandmother (actually, Papa and Gigi) to our grandson Jonah and granddaughter Greta.

If “serving” strikes you as an odd word, here’s my thinking. My wife and I are people of faith, and I’ve always viewed our parental role as one of stewardship. Ultimately our kids belong to their Heavenly Father, and we’re entrusted with the enormous responsibility and honor of being their parents for the time that we’re here.

We’re “serving” our kids, and now our grandkids, in that I believe we’re all created to be in relationship with God, with others, and to serve one another. The awesome role of being Papa to my grandkids means I love them and serve their best interests, helping their parents to guide and nurture them.

And we also spoil the crap out of them on occasion. Hey, it’s Papa’s and Gigi’s job.

I see that a tenet of The Grandpa Project is the need for grandpas to stay healthy so they can make time to build relationships with their grandchildren. Happily, I’ve invested a lot of quality time since becoming Papa four years ago. And being Papa is just about the best job I’ve ever had.

Submitted for use by The Grandpa Project by Jon Osterberg – Redmond, Washington

Here’s another story about a Grandpa “serving” his grandchildren.